Matthew Rogers is in his Three Chopt Sandwich Shoppe’s restroom. It is adorned with mementos of the Cincinnati Reds and a few Florida Gator pieces.

Hendersonville – Local restaurateur Matthew Rogers gets to sing our national anthem on Sunday, Aug. 22 in the Great American Ball Park in his native Cincinnati.

People can watch him sing just ahead of the game if they subscribe to baseball TV packages such as Extra Innings. The Reds are playing Miami.

Matt Rogers and his wife Rosy Jarillo operate Three Chopt Sandwich Shoppe at 103 Third Ave. East. That is a half-block east of Main Street. He is the main chef. She runs the register.

Their most revamped sandwich is the Radiant Rosy. Its grilled chicken is much more heavily marinated. Flavorings are among the distinctions of Three Chopt sandwiches.

Rogers put in 17 new wooden tables this year. Tables had to be spread apart last year to comply with pandemic restrictions. So there were far fewer of them.

Forced half-capacity “crippled” the restaurant financially, Rogers said last summer. “You can barely survive. You’re working for nearly nothing. These are trying times economically. But it’s good to still be in business.”

He carried on. Rogers said patrons act more relaxed this summer when rules relaxed than last summer. Of course, the federal CDC is urging masks to be worn again, even by vaccinated people.

Rogers bought the existing business and began running it 30 and a half years ago on New Year’s Day of 1990.

His hometown Cincinnati Reds won the World Series in that year. They won two titles in a row in the mid-Seventies. Back then they were heralded as “The Big Red Machine” for their explosive offense. The Reds are the longest-running pro baseball franchise and date back to 1869. They are in the current playoff hunt. Rogers follows each game.

Three Chopt’s small restroom is like a museum mostly for the Cincinnati Reds and also for Rogers’ alma mater of Florida. He is a Gator from the class of 1984. The bathroom walls have team photos of the powerful Big Red Machine in 1973-76. A large pennant lists the five world title seasons.

Several Sports Illustrated magazine covers are displayed. The oldest is from 1956. It shows Reds sluggers Ted Kluzewski, Wally Post and Gus Bell. Another SI cover shows a triumphant celebration by closer Will McEnaney. He is shouting while jumping into the arms of catcher Johnny Bench. This is moments after winning the World Series in 1975.

Rogers is a bubbly optimist and popular businessman. He periodically breaks out into singing the national anthem to customers.

Rogers’ “seven rules of life” posted at his shop are to “smile,” “be kind” to “make people feel good,” “don’t give up,” “don’t compare” since “everyone’s on a different journey”, “avoid negativity” in “thoughts, situations and people,” “make peace with your past” and focus instead on the present and for a “better future” and “take care of your body and mind” to better survive struggles.

He is a social-political unifier who crosses stereotypical boundaries of viewpoints. He is a Democrat who once ran for a local state senate seat.

Rogers is a good-hearted Samaritan. He recently put on a benefit dinner for a local fireman’s family. He reached out last year in the midst of the pandemic. Rogers gave away sandwiches to military veterans on Memorial Day and gave out ice cream bars free to his customers on a summer day.

“Giving back to our community feels wonderful,” he said. ”To minister people in any way is very gratifying.” His father David Barrett Rogers was an Episcopal minister.

Matt Rogers is extending his benevolence. He is paying the way for 100 Boys and Girls youths in Cincinnati to attend the Reds game Aug. 22 and to each get a souvenir baseball. Rogers said he will sit and chat with them during the game.

He is also extremely patriotic which helps him relate to those with more conservative perspectives.

“I love my country, and the Reds,” Rogers said. “It was an honor to sing” the anthem in Cincinnati as part of a trio on May 5, 2019. “We hit those high notes” and stayed in harmony. This time he will sing it alone which is a huge step up. He returned a month later in ‘19 to sing “God Bless America” solo during the “seventh-inning stretch.”

Rogers is personally patriotic yet believes in individual choice. “It’s everybody’s right, to voice their opinion. But for me, I’ll stand up there and sing. I only control my own emotions.”

Rogers got a formal authorization to sing the anthem in a letter in mid-July of this year from Reds Chief Executive Officer Bob Castellini. Rogers got to know Castellini through mutual friend Tom Fazio, the golf course designer. That connection enabled Rogers to sing for the team two seasons ago and again this month.

Bearfootin’ Bears are Out in Full Force 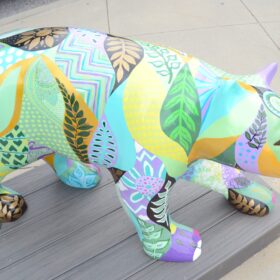 Chuck Edwards is Running for Congress 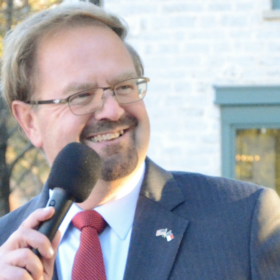 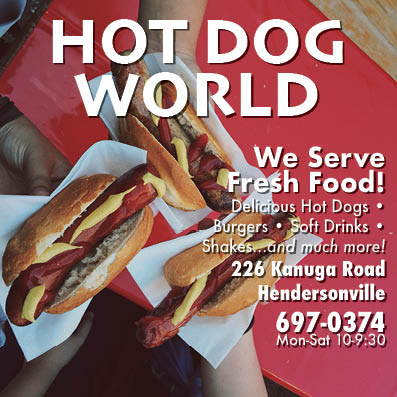