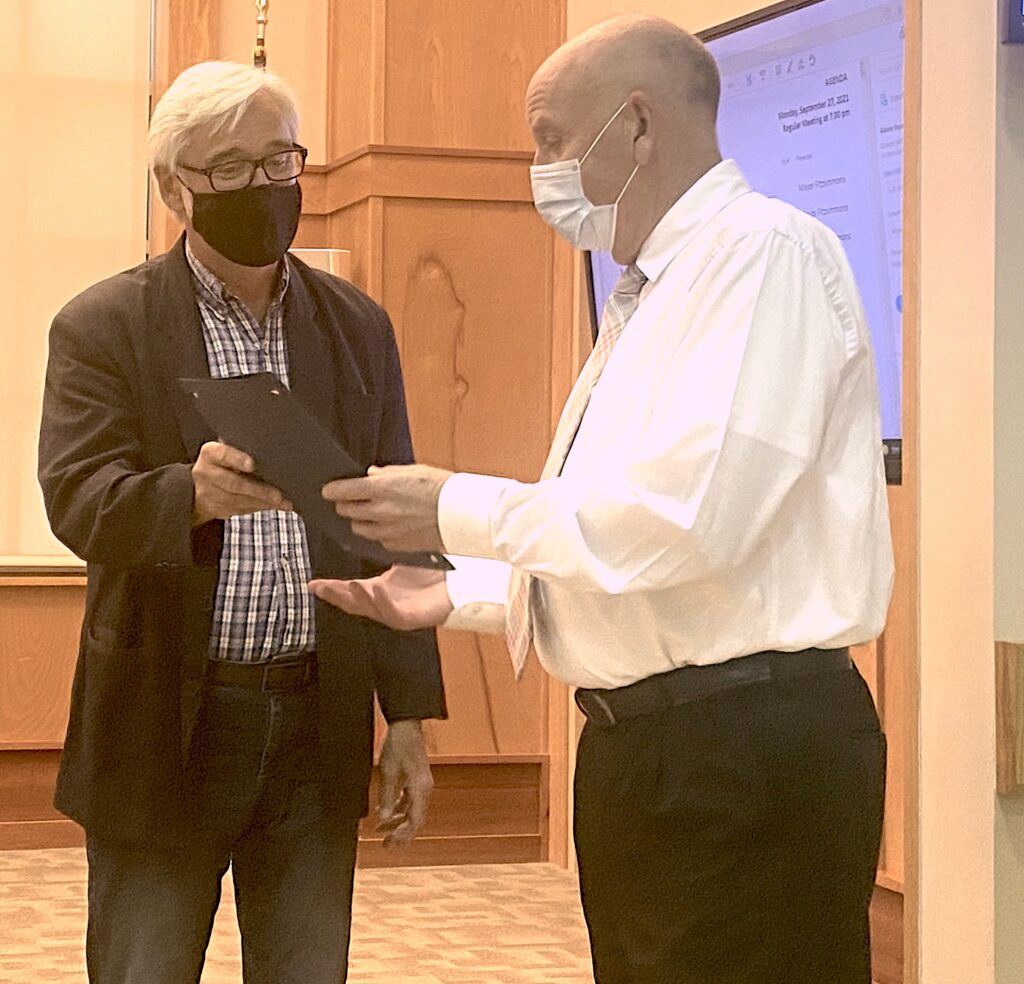 Weaverville – The price tag for the Weaverville Water Treatment Plant expansion caught their council off guard at September’s regular meeting Monday night (Sept 27). That information came late into the meeting and after a spokesperson for a new group known as Saveivyriver.com talked against the expansion.

The meeting started with special recognition for Weaverville Ingles Manager Steve Crawford, who is retiring at the end of September (see story on page 10).

During public comment James Heinl, with Saveivyriver.com, said that he learning about the expansion of the water plant just eight days earlier. Heinl filed as a 501c-3 to, “Spread the word to our community that this is happening…”

He said the group intends to “limit the current water capacity removal from the Ivy River to 1.5 million gallons in perpetuity.” He also said he wanted to collaborate with the board “…and other stakeholders in our community to develop alternative water sourcing…” strategies. Councilman Andrew Nagle pointed out that Heinl did not live in the town limits.

Next, Weaverville Town Administrator Selena Coffey gave her manager’s report to the board. Her briefing included the water treatment plant expansion preliminary engineering report, which would become the subject of discussion later in the meeting. She also spoke of the ongoing effort to strengthen the town’s IT security and that the polling site for the election were approved and will move from town hall to the new community center. She also said a proposed Easement Acquisition Agreement concerning their purchase of a perpetual cell tower easement for $270,000 with US Celluar was in its final talks. Coffey reported that approximately 55 percent of the town’s employees have been vaccinated for COVID-19 and said that the Christmas parade is on the first Saturday of December.

This brought the town to its discussion and action items, the first of which was a report from Doug Dearth on the greenway. Dearth said that just that afternoon, he was sent the vendor’s proposal and was still going over it but in short, “…the vendor is suggesting that scoping through the entire final design is not practical at this time.”  He said what this means is they are proposing to do half of the project at about half the cost.

Jennifer Jackson, town attorney, then presented a code amendment for picketing, protesting and demonstration. The first part says that any group of 10 or more should give a notice of intent to the town 72 hours before the event. It allows those activities to take place in public areas with the exception of streets and parking lots. It also gives police the ability to separate opposing groups.

Councilman Nagle asked about some type of bond for the group, which Jackson said since this is a Constitutional right, any “regulation of those rights comes under strict scrutiny.” She said there might be groups that could not afford a bond, which would deny those rights and would certainly be challenged.  Vice-mayor Doug Jackson asked about damage to property during such activities. Jackson said protesters and demonstrators are held to the same criminal and civil liabilities as anyone would be. The council passed the amendment.

A recent state law allowing social districts outside ABC licensed businesses, such as sidewalks, was next on the agenda and was made a topic of discussion at the next council workshop, along with fundraising for the new community center. The council then voted to spend more than $13,000 to give remote access and recording to council meetings.

The council then got their sticker shock on the expansion of the water treatment plant during the discussion of American Rescue Plan (ARP) funds which can be used for water projects. Nagle asked a question of Town Finance Director Tonya Dozer about the cost of the expansion.

Coffey interrupted, saying, “Tonya is not going to know the answer to this question, but I will go ahead and break the bad news to you. We have a recent proposal. I don’t want her giving you a number and it be off because it’s way off.”

Coffey then proceeded to tell the board that the approximately $6 million projected cost back in 2017 had now ballooned to $13.5 million.

“The Ivy River may be saved,” commented Nagle.

Coffey said they did not have time to review the numbers, so more information would be forthcoming. Next was discussion about the down payment on an FDA loan to build the expansion and concerns of the price tag occurred. Comments were made by resident Catherine Cordell about spending some of the ARP funds on public wifi. The council then went into an executive session before adjourning.

WES Names Teacher of the Year

Council Goes Back to In-Person Meetings